It was late 1980s when Govinda was still trying to find his footing in Bollywood. Just two films down, Govinda thought of giving television a shot too. In fact he auditioned for the role of Abhimanyu in TV’s cult show Mahabharat (1988). But luckily, Tan-Badan happened, his first lead role opposite Khushbu and directed by his uncle Anand. He never looked back at TV and went on to act in nearly 50 films for the next six years. That was when Shola Aur Shabnam became a hit, opening more doors for him.

However, his calling card, the ‘No. 1’ series of films, mostly helmed by filmmaker David Dhawan, were still in future. Raja Babu, Hero No. 1, Hadh Kar Di Aapne, Bade Miyan Chote Miyan, Coolie No. 1, Saajan Chale Sasural and dozens more continue to remain a genre in itself, one of the high points of the 90s.

But what exactly makes a Govinda film? “Great dance on great songs and great comedy,” Govinda had told indianexpress.com in an interview. 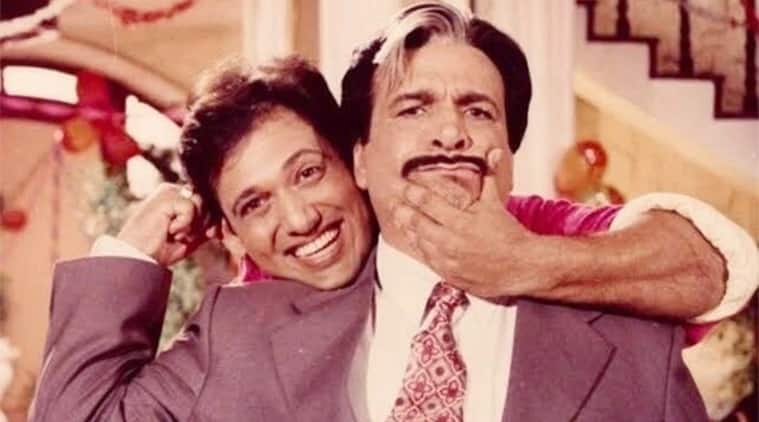 Govinda and Kader Khan have played either arch rivals or father-son in several films.

Govinda might have said time and again that the characters he played were nowhere similar to his real self, but when he stood under the arch lights, there was no one like Govinda. The kind of comedy he brought to the table was beyond timing. Take for instance his Dulhe Raja. A dhaba-owner struggling to keep his food joint running when a filthy rich and powerful hotelier threatens to demolish it on a daily basis. Sounds like a sob story of struggle? On paper maybe, but the film made it a laugh riot.

And can we ignore his pelvic moves? Govinda’s dance continues to remain unmatchable, and his songs are integral to our house parties too, when we wish to dance like no one’s watching. By this we do not mean his dance was all about fun and laughter. It was serious dancing. Who all remember “Husn Hai Suhana” or for that matter “Meri Pant Bhi Sexy.”

“My dance was not like dance anyway. That used to be the interesting part. People used to say that when Govinda dances, it does not even look like he is dancing,” he told IANS in 2016. From complicated moves to complicated expressions, Govinda’s songs have a separate fanbase even to this day. But there’s more to his songs and characters – the colours!

A red trouser with a yellow shirt and sunglasses is a signature of Govinda. And we loved him sporting that. Even when he wore dhotis in Saajan Chale Sasural, each one was in the gaudiest shade, yet we knew what Govinda can do, no one else can. The look of his characters were half the battle won in his films. And when he played a rich brat in say, a Hero No. 1 too, he had a style. To say his films were flamboyantly colourful would be apt.

“When I did those things, I never thought about it. I do not see how many people are trying to match my style. My basic line is that I try to be honest and that gives me the power to continue doing good work,” the star told indianexpress.com earlier.

Govinda had his style. Even when he shared screen space with his biggest competitors or legends, he managed to stand out. From starring with Amitabh Bachchan in Bade Miyan Chote Miyan to Salman Khan in Partner, he got the lion’s share of laughs. That’s also because apart from the hook steps in his dance, his dialogues lingered as well. “Tum kya apne aap ko Mughal-e-Azam, hum log ko Anarkali samajhta hai bey… kitna nacha raha hai?” — still brings a smile on your face? Only Govinda can teach you the entire Hindi alphabets in the song “Aa Aa E Oo Oo Ooh Mera Dil Na Todo.”

Apart from his super successful collaboration with director David Dhawan and actor Kader Khan, there were names like Sanjay Dutt, Neelam, Karisma Kapoor, Raveena Tandon and Shakti Kapoor who had a lasting impact on Govinda’s filmography. In fact Hatya, Achanak, Shikari and Hathkadi are some that showed more aspects about his craft – drama, suspense and action. Bade Miyan Chote Miyan (1998) had Govinda and Amitabh Bachchan in a duble role.

“I did a film called Hatya in 1988, which is my favourite performance of myself. Until this film people only associated Govinda with song and dance. But after this film released, people saw me in a new light. I insisted on producing this myself because I was adamant that people saw me differently,” he once told Film Companion.

We might want to thank Govinda for giving us the most iconic comedies in the 1990s, an era when the Khans ruled at the other end of the spectrum with either their big screen romances or actioners. Govinda’s films were massy family entertainers that catered to everyone.

Govinda’s kind of cinema remained numero uno, until the Priyadarshan and Akshay Kumar brand of comedy arrived. Yet, Govinda’s histrionics remains a reference point for several actors even today. Did we say Varun Dhawan?

‘The complete actor’ is not just a sobriquet, but Mohanlal’s legacy

‘The complete actor’ is not just a sobriquet, but Mohanlal’s legacy

Smart changes that can help to tackle childhood obesity

Over 13,000 Covid-Negative People “Forcibly” Sent To Quarantine In Beijing