Actor Anushka Sharma wished fans a happy Halloween with pictures of her daughter Vamika, dressed as a fairy. Anushka and her husband, ace cricketer Virat Kohli, celebrated the festival with others cricketers’ children in Dubai. The couple is presently in the United Arab Emirates for the ongoing T20 World Cup.

In one of the photos shared by Anushka, cricketer Ishan Kishan is seen holding Hardik Pandya and Natasa Stankovic’s son Agastya, while Vamika watches them, wearing a frock with angel wings and a unicorn headband. In the frame were Rohit Sharma’s daughter Samaira and R Ashwin’s daughters Aadhya and Akhira. “Happy Halloween from this cute bunch. Oh and @ishankishan too,”  Anushka wrote.

In another photo, Anushka held Vamika in her arms, with Virat beside her. Rohit, his wife Ritika Sajdeh, Samaira, R Ashwin’s wife Prithi Narayanan, Aadhya and Akhira were present in the photo as well. Sharing it, Anushka wrote, “And also from us.” Vamika’s face is not present in the photos, as Virat and Anushka are particular about not exposing their child to social media. 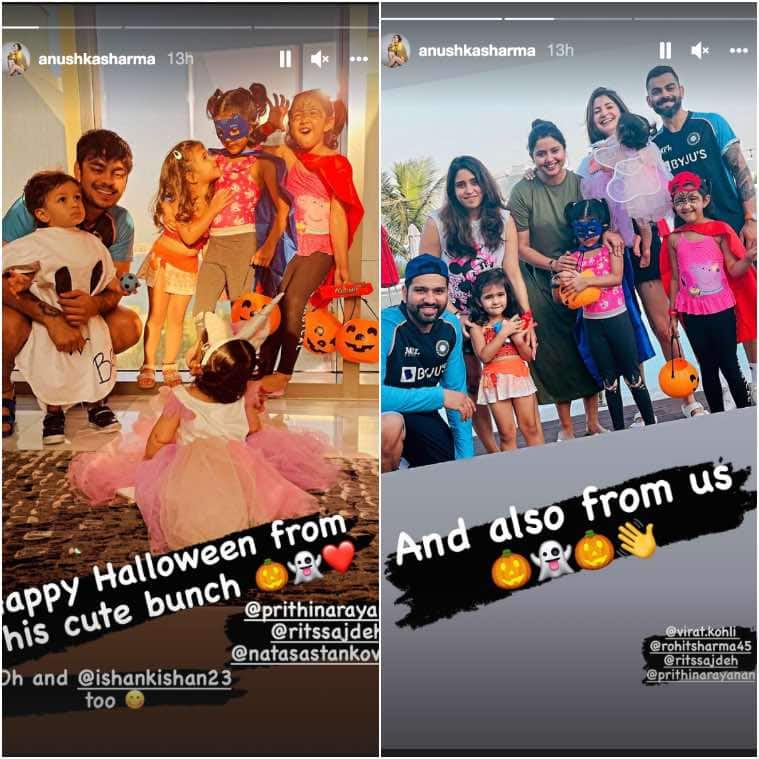 While Vamika dressed as a fairy, Soha Ali Khan had some other ideas for her daughter, Inaaya. Soha dressed as a ghost, while Kunal Kemmu sported long white hair, and Inaaya was dressed as a unicorn. Soha captioned her post, “Be afraid, be very afraid!”

Bipasha Basu and her husband Karan Singh Grover decided to opt for a ‘disco look’ for their Halloween party.

Television actor Karan Tacker shared his look from Halloween too. In the photo, he is wearing black eyeshadow and dressed in a costume that looks like something out of the film, The Rocky Horror Picture Show.

Celebrities are celebrating Halloween in full swing and fans can’t wait to see their costumes and glimpses of their parties.

Thomas Cup: How the vanquished reacted