Fears of rising baguette prices pose crunch for the French

A hike in the cost of wheat is alarming French households who fear a possible rise in the price of the prized baguette, seen by many as a barometer of the country’s economic health.

Many boulangeries around France are putting up signs, warning customers that the long, crunchy staple could be going up in price by 3 to 5 centimes (4 to 6 cents), from its average of about 89 centimes (just over $1).

“Although that might not seem like a lot, it’s a huge increase. The baguette is precious. It has only gone up 23 centimes in the last 20 years,” said Dominique Anract, president of the French Confederation of Bakeries and Pastry Shops.

The bread industry crunch has been linked to a 30% worldwide increase since September in the price of wheat — one of the baguette’s key ingredients — after bad harvests in Russia, Anract said. Rising energy prices that are making ovens more expensive to operate are also a factor, Anract and other experts say, with businesses and consumers worldwide already feeling the heat of higher prices from supply chain and labor constraints.

Energy prices are affecting the Italian food chain, too, with expectations they will push up the cost of drying grains. That could eventually raise the price of bread and pasta at supermarkets, but meat and dairy aisles are even more vulnerable as beef and dairy farmers are forced to pay more for grain to feed their animals and pass the cost along to customers.

France’s 67 million people are voracious consumers of the baguette. The country’s “Bread Observatory” — a venerable institution that closely follows the fortunes of the famed 65-centimeter (26-inch) loaf — notes that the French munch through 320 baguettes every second. That’s an average of half a baguette per person per day and 10 billion every year.

“Even three centimes higher is dire when played out nationwide,” Anract said. “The baguette is our emblem, our symbol, the thermometer of our economy. It’s perhaps like Britain’s pint of milk. It can never go beyond one euro.” 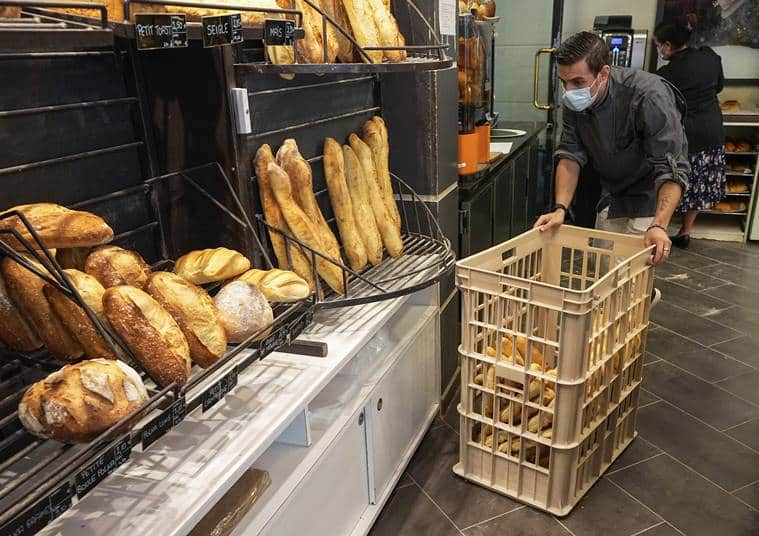 Marc Cohen, a 35-year-old father of two, said outside his local baker in the Le Marais area of central Paris that rising baguette prices “would be a pain in the neck. Costs are going up everywhere. Even 5 centimes is a lot because we get one every day. That adds up over the year, and next year it will probably be the same.”

Calling it “depressing news,” 43-year-old engineer Franck Nguyen said “the baguette is an institution in France. If the price goes up by too much, there will be big opposition.”

Although the baguette seems like the quintessential French product, it was said to have been invented by Vienna-born baker August Zang in 1839. Zang put in place France’s steam oven, making it possible to produce bread with a brittle crust yet fluffy interior.

The product’s zenith did not come until the 1920s, with the advent of a French law preventing bakers from working before 4 a.m. The baguette’s long, thin shape meant it could be made more quickly than its stodgy cousins, so it was the sole bread that bakers could make in time for breakfast.

French Culture Minister Roselyne Bachelot has even nominated the baguette for a place on UNESCO’s Intangible Cultural Heritage List next year.

Baguettes are such serious business that bread observers say bakers around France are willing to sacrifice other bread products to maintain the price of the baguette, by spreading around extra costs.

That worries 24-year-old student Sandrine Boyer. She said she spends most of her bakery money on products other than baguettes and hopes “that the price of the breads in general will not go up as well.”

Bread has often stirred French passions. Marie Antoinette’s famously misattributed quote, “Let them eat cake,” was one of the supposed triggers of the 1789 French Revolution.

Yet Anract was sanguine about the immediate future.

“In the Revolution, there was a penury of bread, there was not enough of it,” he said. “It wasn’t about the price of bread. We’re not at that stage yet!”