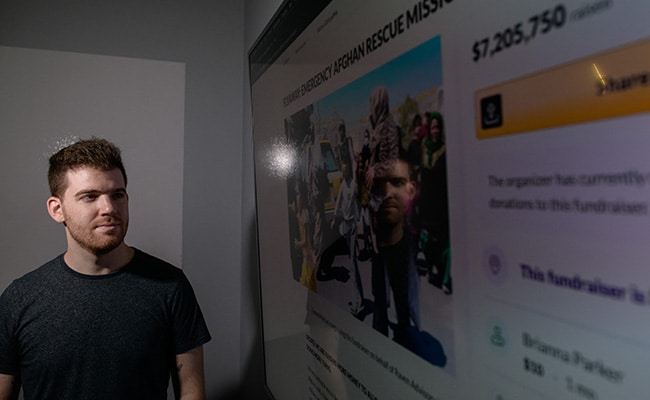 When Instagram influencer Tommy Marcus read that Kabul had fallen to the Taliban he sprang into action, without knowing that like-minded US veterans were also desperate to do something.

“I was more horrified and disgusted and just wanted to help,” recalls the 26-year-old New Yorker, who is known to his 800,000 followers as “Quentin Quarantino.”

With just a few clicks on his phone from his home in New Jersey, Marcus started what would become an extraordinary operation to evacuate hundreds of terrified Afghans.

In three days he raised $7.2 million and rallied to his cause retired soldiers and former diplomats, as well as experts in asylum law, humanitarian aid and airlifts from war zones.

It is a plotline worthy of a Hollywood movie: a combination of the power of social networks, rapid crowdfunding and the logistical efficiency of American veterans that led to the rescue of 565 Afghans.

AFP has spoken to several of the main actors of “Operation Flyaway,” which was launched on August 17 and is ongoing, and reviewed contractual and budgetary documents related to chartered planes and arrivals in the United States.

Messages from Afghan women, children, LGBTQ people, social workers, journalists and interpreters to organizers begging for help to flee the country have also been read.

Marcus, known on social media for humorous memes that target ex-president Donald Trump and tackle issues related to vaccinations and abortion, was stunned by the images of desperate Afghans hanging from a US military plane that was taking off from Kabul airport.

He was overwhelmed by photos and messages from Afghans pleading with him to act, including one from a woman who wrote: “For humanity and justice accept me as a refugee in a safe country.”

Marcus posted a message to his followers saying he wanted to help but wasn’t sure how, and within a few minutes “thousands and thousands” of responses poured in, he told AFP.

Among them was one from a longtime fan who claimed to be working with a group that recently got a few hundred people evacuated to France and was now out of money, according to Marcus.

The influencer urged his followers to help him raise at least half a million dollars in 24 hours.

“It was a crazy viral burst of money,” said Marcus, who then needed to figure out what to do with it.

The self-described “liberal-pacifist” turned to war-zone professionals for guidance.

He was approached by Raven Advisory, a former Pentagon and CIA security services agency, and enlisted Karen Kraft, a former US Army Reserve officer turned TV producer who heads a veterans association.

“Everybody had a shared sentiment that we have to do something,” said Kraft, the backbone of the operation.

“This is the purest thing that I’ve ever done,” Hatch told AFP.

They spent $4.79 million on chartering several flights that helped rescue the 565 Afghans.

The money was shared between several charter companies including Egyptian firm Mayfair and Kiwijet, owned by New Zealand businessman Nicolas Steele. US authorities have previously investigated Steele on suspicion of fraud, according to the Washington Post.

The companies were in the process of organizing several additional flights when on August 26 a suicide bombing claimed by the Islamic State group tore through Kabul Airport, killing more than 100 people including 13 American soldiers.

“Flyaway” flights that had already been paid for were cancelled due to the deteriorating security and soaring insurance premiums, but later were able to resume.

“That froze everything,” lamented Enrique Herrera, a retired US Air Force member who was given the job of “special operator.”

Another $1.2 million was sent to a women’s NGO and around $1 million remains yet to be spent, accounts show.

Kraft said two new flights with room for 600 passengers are ready to leave as soon as possible.

GoFundMe, the large crowdfunding platform that handled the release of the funds, told AFP that Flyaway had complied with US and international laws and financial regulations.

The Pentagon and State Department have not spoken publicly about Operation Flyaway.

Detractors note that the several hundred people rescued are a drop in the ocean compared to the 123,000 extracted by the US government and other states.

So was it all worth it? “Absolutely,” said Herrera. “Because those are human lives.”

Somayah, whose father was killed by the Taliban, was one of those evacuated to a nearby country on September 21.

The 21-year-old hopes to make it to the United States to “have a country to call my new home… where I’m able to be who I literally am and really want to be,” she told AFP.