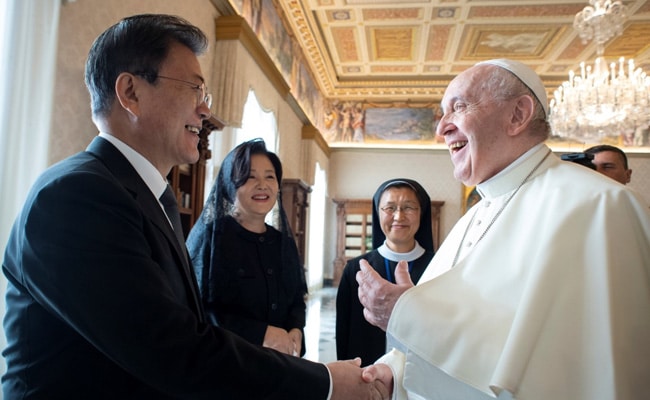 South Korean President Moon Jae-in met Pope Francis on Friday, giving him a cross made from barbed wire from the peninsula’s demilitarized zone and again urging him to visit North Korea.

Moon, who is Catholic, was in Rome for the G20 summit of world leaders. He held private talks with the pope for about 25 minutes, the Vatican said.

Moon’s office said the president, who will leave office in May, had told Francis that a papal visit to Pyongyang would help revive the peace process on the Korean Peninsula.

“If you send me an invitation, I will gladly go to help you, for the sake of peace. Aren’t you brothers who speak the same language? I’m willing to go,” it quoted the pope as saying.

The Vatican said in a statement that the two sides discussed “the promotion of dialogue and reconciliation between Koreans” and the hope that “joint effort and good will may favour peace and development in the Korean peninsula, supported by solidarity and by fraternity”.

When he met the pope in 2018, Moon relayed a verbal invitation from North Korean leader Kim Jong Un to Francis for the pontiff to visit North Korea.

Vatican officials said at the time that the pope, who has made many appeals for rapprochement between the two Koreas, would consider such a trip under certain conditions if it could help the cause of peace.

North Korea’s constitution guarantees freedom of religion as long as it does not undermine the state.

But beyond a handful of state-controlled places of worship – including a Catholic church in the capital Pyongyang – no open religious activity is allowed and the authorities have repeatedly jailed foreign missionaries.

There is little information on how many of North Korea’s citizens are Catholic, or how they practice their faith.

Negotiations between Pyongyang, Washington and Seoul aimed at dismantling North Korea’s nuclear and missile programmes have been stalled amid efforts by both Koreas to develop increasingly sophisticated weapons