In the final days of the tight race for Virginia governor, the candidates are turning to the unlikeliest of campaign props: a novel from 1987.

A new online advertisement released this week by Glenn Youngkin, the Republican candidate, features a mother who pushed to have Toni Morrison’s “Beloved” banned from her son’s English curriculum eight years ago, citing the book’s graphic scenes. When that failed, she started an effort that eventually became a bill passed by the Republican-controlled General Assembly, but that was rejected by former Gov. Terry McAuliffe, the Democrat now running to win back his old job.

“It gave parents a say — the option to choose an alternative for my children,” the northern Virginia mother, Laura Murphy, says in the ad. “But then Gov. Terry McAuliffe vetoed it twice. He doesn’t think parents should have a say. He said that. He shut us out.”

Left unsaid in the ad was that the mother and her husband are Republican activists, that their son was a high school senior taking Advanced Placement English when he read the passages that supposedly gave him nightmares, or that he later went on to work briefly in the White House under former President Donald Trump and now works for the GOP’s congressional campaign committee. Also unmentioned was the novel in question: a Pulitzer Prize-winning fixture of the American literary canon — by a Nobel Prize winner, no less — whose harrowing scenes conveyed the horrors of slavery, a subject with obvious historical resonance in Virginia. 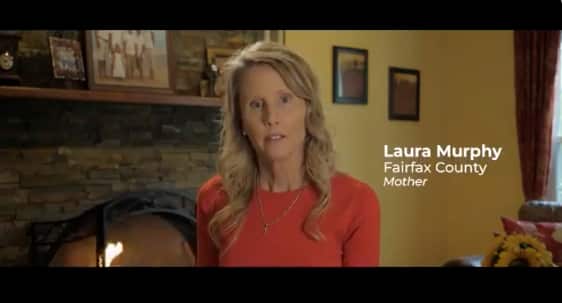 A provided image shows Laura Murphy in a screengrab from an advertisement for Glenn Youngkin, a gubernatorial candidate in Virginia. (Youngkin for Governor via The New York Times)

To Democrats, the Youngkin ad was both a throwback to the days of book banning and a coded insult to one of America’s most celebrated Black authors, after months of frantic Republican alarms, in Virginia and nationwide, about how schoolchildren are being educated about racism.

Youngkin and his allies, noting that the ad had not mentioned “Beloved” or Morrison, insisted it had merely been intended to showcase what they contended was McAuliffe’s disregard for the prerogatives of parents in overseeing their children’s education. The specifics had not been mentioned, they said, because they were beside the point.

What was indisputable was that the ad — which had not even been run on television — had suddenly given both Youngkin and McAuliffe a much-needed new rallying cry in an election that is widely expected to hinge on which of them is more successful at mobilizing their core supporters to get to the polls.

There was almost an inevitability to the way the Virginia governor’s race was winding down with an argument about racism.

Four years ago, with Trump in the White House and memories of the deadly extremist rally in Charlottesville, Virginia, still fresh, the Republican nominee, Ed Gillespie, finished his campaign with a series of pledges to protect the state’s Confederate monuments, a development Democrats charged as racist.

This year, Youngkin is centering his closing messaging on what he calls “parents’ rights” — an all-encompassing rubric for conservative causes like opposing mask mandates, vaccine requirements and transgender rights, and stoking fears about the way race is taught in the schools.

For months, the conservative media have lavished national attention on local events in suburban Loudoun County, Virginia, including a sexual assault case that revived Republican criticism of gender-inclusive bathroom policies in schools and the suspension of a physical education teacher who refused to address transgender students by the pronouns that they identified with. Conservatives have also falsely claimed that Virginia schools are teaching “critical race theory,” an advanced academic concept that is not part of classroom instruction in the state.

Polling indicates that those themes have resonated with conservative voters in Virginia.

“I don’t have any school-aged kids, but I’m a big believer that parents certainly do have a say in what their kids should learn,” Tom Allen, 64, a retired airline pilot from Herndon, Virginia, said as he headed into a community center to cast an early vote for Youngkin on Monday. “I don’t think somebody should be jamming a political opinion down these little kids’ throats.”

Yet Democrats, too, have discerned an opportunity to energize their supporters — by painting Youngkin, who opposes abortion rights, as a threat not just to women’s control over their bodies but to the schools’ ability to shape young minds.

“He’s gone from banning a woman’s right to choose to banning books by a Pulitzer Prize-winning author,” President Joe Biden said of the Republican candidate at a rally with McAuliffe in Arlington on Tuesday night.

There, McAuliffe staff members handed out copies of “Beloved” and other books by Morrison, along with bookmarks proclaiming that Youngkin would “ban books in Virginia schools.” Liberal television hosts quickly scheduled interviews with scholars who extolled the importance of her work.

McAuliffe has struggled to motivate liberals, and Democratic activists have expressed concern that he has yet to fully energize Black and Latino voters. Some party strategists believe the “Beloved” ad and its blowback could provide his campaign with a well-timed burst of energy.

“It’s a reminder to Virginia voters how extreme Glenn Youngkin is, despite going to great lengths to look like a harmless suburban dad,” said Josh Schwerin, a strategist who worked on McAuliffe’s 2013 campaign.

Republicans counter it is the McAuliffe campaign that is employing divisive culture-war tactics to close out the race. Youngkin, they argue, is simply trying to ensure that parents are informed and have input over their children’s curriculum. And McAuliffe, they note, accepted the support of Gov. Ralph Northam and Attorney General Mark Herring, both of whom were forced to acknowledge that they dressed in blackface decades ago as students.

“​​The Morrison part is another distortion, trying to make it a racial issue,” said George Allen, who served as both governor and a senator from Virginia. “I don’t think parents have any idea the race of whoever wrote any book. They think the descriptions are things parents should know about.”

While the effectiveness of Youngkin’s ads may not become clear until polls close Tuesday, there has been one clear beneficiary of the controversy: As of Wednesday afternoon, Morrison’s 34-year-old novel was one of the top 50 bestselling books on Amazon.