In a closely watched contest for two new IPL T-20 teams, RP-Sanjiv Goenka group and private equity player Irelia (part of CVC Capital Partners) have emerged winners. The Board of Control for Cricket in India (BCCI) announced the new franchises on Monday evening following an open auction in Dubai. There were nine bidders including two from overseas.


At Rs 7,090 crore, RPSG’s winning bid for Lucknow made it the most expensive team in the IPL tournament. Irelia Company Pte Ltd got the second franchise for Ahmedabad at Rs 5,625 crore. The new teams are for the tournament to be played next year.


RPSG bid was more than four times of what Sahara had paid for the Pune franchise in 2010. In fact, both the winning bids were many times higher than the minimum base price of Rs 2,000 crore for each and exceeded the expectations of experts.


BCCI president Sourav Ganguly said, ‘’it is heartening to see the inclusion of two new teams at such a high valuation, and it reiterates the cricketing and financial strength of our cricket ecosystem.’’


The CVC Capital group is not a new investor in sports- it recently agreed to pay $3.2 billion for a minority stake in La Liga Spain’s top soccer league. It also invested in three rugby teams and exited Formula One in 2017 where it invested $ 1.71 billion in 2005. It also exited from its investment in Dorna Sports in 2017 after buying into it in 1998. Dorna Sports organises the MotoGp motorcycle racing series. It also invested in Volleyball World in tie-up with International Volleyball Federation. 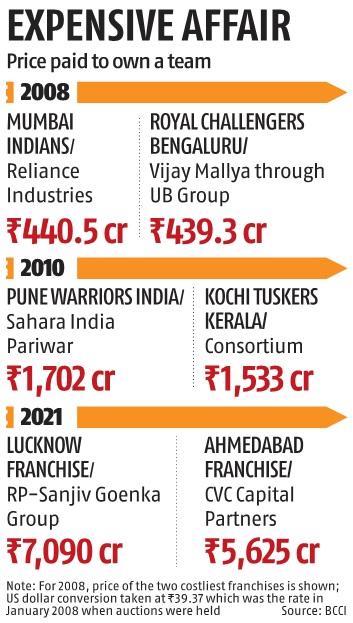 The new franchise owners are willing to pay a hefty premium because of the upside in revenues expected 2023 onwards when the broadcasting and media rights (currently with Disney+ STAR) come up for re-auctioning for five years.


According to sources close to BCCI, with ten teams instead of eight from 2022 and matches going up from 60 to 74 every years, there has been huge interest for the rights-Reliance through Viacom 18, Amazon Prime, an unknown global player apart from Disney and Sony are expected to be serious bidders.

Projections suggest the acquisition price would double from Rs 16,347 crore for five years to Rs 32,694 crore. As a result each franchise will see a 60 per cent increase in its revenues from its share of the broadcasting and media rights which will go up from Rs 201.6 crore to Rs 326.9 crore annually.


Revenues of each team are estimated to go up from the current average ranging from Rs 350 crore-400 crore annually to around Rs 450 crore-550 crore per annum as a result of an expected hike in media rights as well as an increase in sponsorship money.


The revenue increase, if achieved, is nearly fivefold of what teams had reached in 2009-the second year of IPL when average revenues were below Rs 100 crore and most of them were bleeding.


The central revenues of BCCI which include the broadcasting and digital rights as well as sponsorships like the title sponsor etc are shared in such a way that half of its goes to the cricket body and the rest is shared equally amongst the franchises.


Also the winners of the new franchises do not have to pay the entire bid money in one go – they have to fork out 20 per cent of their revenue to the BCCI each year till they meet the total winning amount.


A key reason for the IPL teams to be an attractive business proposition has been the huge increase in central revenues. For instance, from 2008 to 2017, Sony Set Max, which had the broadcasting right, forked out only Rs 820 crore a year.

However, Star India changed the game in 2018 when it paid four times more-Rs 3269 crore per annum-to grab the broadcasting and digital rights for five years. In 2023, the two new teams as well as the older franchises will again benefit from another huge expected increase when the rights come for re- auctioning.

Business Standard has always strived hard to provide up-to-date information and commentary on developments that are of interest to you and have wider political and economic implications for the country and the world. Your encouragement and constant feedback on how to improve our offering have only made our resolve and commitment to these ideals stronger. Even during these difficult times arising out of Covid-19, we continue to remain committed to keeping you informed and updated with credible news, authoritative views and incisive commentary on topical issues of relevance.

We, however, have a request.

As we battle the economic impact of the pandemic, we need your support even more, so that we can continue to offer you more quality content. Our subscription model has seen an encouraging response from many of you, who have subscribed to our online content. More subscription to our online content can only help us achieve the goals of offering you even better and more relevant content. We believe in free, fair and credible journalism. Your support through more subscriptions can help us practise the journalism to which we are committed.