When I first wrote about Instant Pots back in 2017, it was with the ardor of new love. I had fallen hard for my first electric pressure cooker, delighting in the myriad ways it could improve my kitchen life. All those weeknight meals of dried beans and silky braised meats, the speedy brown rice, the endless flow of soups and homemade stock changed how I cooked in a fundamental way.

The question was, would the habit stick? Or would my Instant Pot end up like so many panini presses and sous vide wands — on a shelf in the basement, fuzzy with dust?

I’m happy to report that, nearly five years in, it has remained an integrated and well-used kitchen tool. After hundreds of meals, I have learned a few very valuable lessons, whether getting the smell out of the sealing ring or troubleshooting the dreaded burn message.

Here are my best practices and tips for getting the most out of your Instant Pot:

Play to Its Strengths

The most important thing I have learned is to stick to what the Instant Pot does well. Any dish that traditionally needs long, slow cooking in a moist environment will turn soft and succulent a lot faster in an electric pressure cooker.

Tough cuts of meat become incomparably tender and silky. Pork shoulder — stewed with wine, herbs, root vegetables and olives or capers for brightness — becomes a staple as soon as the weather turns cool. I especially love the Instant Pot for making chickpeas from scratch, which taste about a million times better than canned. And I haven’t made risotto or rice pudding on the stove since taking the Instant Pot out of its box. Why mess with perfection?

It’s bound to happen at some point: You have filled your Instant Pot, set the pressure to high, then opened the lid to find dinner only half cooked. What went wrong?

The sealing ring may be slightly askew. Before cooking, make sure the ring is pressed down all the way around the inside cover of the pot. Then after the machine starts counting down, check that the pressure indicator at the top is firmly in its locked position (I poke it with a chopstick).

Your electric pressure cooker can’t tell the difference between the tasty, caramelized bits that stick to the pot after you brown your ingredients (sometimes known as the fond) and food that is smoldering to a crisp. And that is a common reason the burn message appears.

If you have seared your ingredients using the sauté function, add some liquid to the pot, bring it to a simmer, then scrape up all those browned bits thoroughly before locking the lid.

It’s also important to use enough liquid, at least a half cup, even if the recipe doesn’t direct you to. Older Instant Pot recipes, my own included, might have been tested on earlier models of the appliance, which had a less sensitive burn sensor. These recipes might not call for that much liquid because the old models didn’t need it.

If the burn message does come on midway through cooking, don’t panic. Simply release the pressure, open the pot and give everything a big stir, scraping up anything stuck to the bottom. If the pot looks dry, add a few tablespoons water or other liquid. Then reseal the pot and continue cooking.

Cooking dried beans from scratch on any given weeknight is a triumph of the electric pressure cooker. To get the best flavor, add salt at the beginning. Cooking beans in salted water helps flavor them evenly.

The colder the ingredients are when they go into your pot, the longer it will take to reach pressure. (Say, for example, you are using a block of frozen broth dumped in from a quart container, my mainstay.) Defrosting liquids in the microwave can speed things up. Or if you are adding water and have an electric kettle, you can heat the water while prepping your other ingredients. 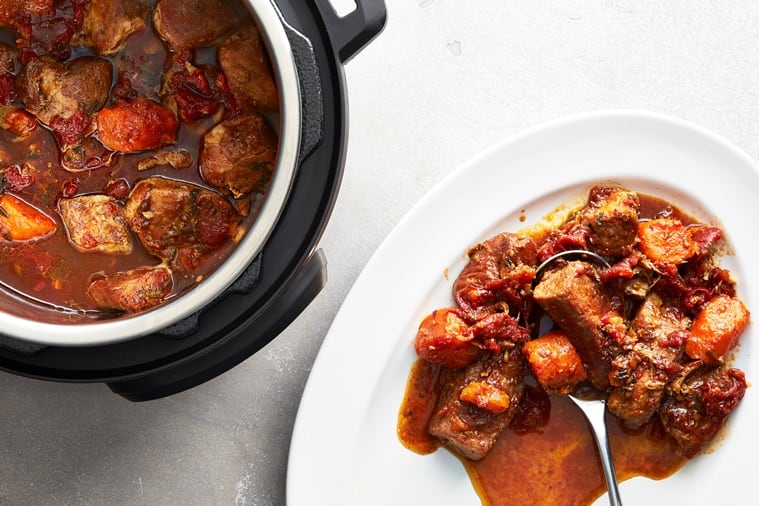 Instant Pot pork stew with red wine and olives in New York. Knowing what to cook in your electric pressure cooker can set you up for weeknight successes. Food styled by Roscoe Betsill. (Armando Rafael/The New York Times)

The easiest way I have found to get rid of that lingering, slightly sulfurous scent that clings to the sealing ring is making a paste made from baking soda and white vinegar. Spread it all over the ring, and let it sit in the sink for an hour or so (or overnight for really tough cases). Then throw the whole thing into your dishwasher. I do this along with all my other dishes, and everything comes out sparkling.

Pork shoulder is one of the most glorious things to cook in an electric pressure cooker. The meat becomes velvety and suffused with rich, brawny juices. Here, red wine, tomatoes, rosemary and sage perfume the pork, while olives, stirred in at the end, give it brightness. This stew is even better cooked a day or two ahead, giving the flavors time to meld. Making it in advance also gives the fat a chance to solidify, so it’s easy to remove before reheating. Then, if you like, you can reheat the stew in the electric pressure cooker using the sauté setting. Serve this over polenta or rice, or with good bread, to soak up the meaty sauce.

6 garlic cloves, grated, passed through a press or crushed into a paste

1/2 cup pitted and torn green olives, such as Castelvetrano

Chopped parsley or basil, for serving

1. Season the pork all over with the salt and pepper. In a large bowl, combine the pork, garlic, rosemary, sage and red-pepper flakes.

2. In a small dry skillet, toast the coriander seeds until fragrant, 1 to 2 minutes. Transfer to a mortar and pestle and coarsely crush (or do this on a cutting board with the side of a heavy knife). Add crushed seeds to the pork and toss well. Refrigerate for at least 30 minutes or overnight.

3. Set the pressure cooker to the sauté function on medium. Add 1 tablespoon oil and let it get hot for a few seconds, then add enough pork chunks to fit comfortably in one layer with a little space around each piece. Let brown for 2 to 3 minutes per side, then transfer the cubes to a plate. Add a little more oil if the pot looks dry and continue browning the rest of the pork.

4. Add the wine to the pot and let simmer, scraping the browned bits from the bottom, until it reduces by half, about 2 minutes. Using kitchen shears or your hands, break the tomatoes into pieces and add them, along with their liquid, to the pot. Return pork to the pot, stir in carrots and 1/2 cup water.

5. Seal the pot and cook on high pressure for 45 minutes. Let the pressure release naturally.

6. Using a slotted spoon, transfer pork to a serving platter. Use a fat separator to separate the fat from the juices, or just spoon the fat off the top. (There may be a lot of fat.) If the sauce seems thin, use the sauté function to simmer it until it thickens. Stir in olives, then taste the sauce and add more salt, if you like.

7. Spoon the sauce over the pork, then top with chopped parsley or basil and serve.

Perfumed with cinnamon, cumin and turmeric, and drizzled with a creamy, garlicky tahini sauce, these tomato-braised chickpeas make for a complex, satisfying meatless meal, especially when served with warm flatbread for dipping into the sauce. If you are starting with soaked and drained chickpeas, reduce the water to about 1 1/2 cups — just enough to cover them — then cook on high pressure for 13 minutes instead of 35.

4 garlic cloves, grated, passed through a press or minced

1/2 cup chopped cilantro, mint or parsley, plus more for garnish

For the tahini sauce:

1 garlic clove, finely grated, passed through a press or crushed to a paste

1. Using the sauté function set on medium, heat oil in the pressure cooker pot. Add the sliced onions and 1/4 teaspoon of salt, and cook, stirring frequently, until the onions are lightly golden brown, 10 to 12 minutes.

2. Stir in garlic and cook until fragrant, about 1 minute. Using kitchen shears or your hands, break the tomatoes into pieces and add them, along with their liquid, to the pot. (If using diced tomatoes, just add them to the pot.) Stir in cinnamon stick and bay leaf, scraping any browned bits from the bottom of the pot, and simmer until sauce has thickened slightly, 2 to 3 minutes.

3. Stir in chickpeas, cumin, turmeric, remaining 2 teaspoons salt and 4 cups water. (The water should cover the chickpeas by about an inch; if not, add a little more water.) Cover and cook at high pressure for 35 minutes. Let the pressure release naturally for at least 20 minutes. Release any remaining pressure.

4. While the chickpeas cook, make the tahini sauce: Combine lemon juice, garlic and salt in a mixing bowl. Whisk in tahini, then whisk in oil, a few drops at a time, until emulsified. Whisk in enough ice water to make a thin, pourable sauce. Taste and add more lemon juice, if needed.

5. Stir chopped cilantro into braised chickpeas and taste, adding more salt, if you’d like. To serve, garnish bowlfuls with a big drizzle of tahini sauce and more cilantro.

Rice pudding prepared in an electric pressure cooker is both speedy and simple — the kind of thing you can whip up in minutes in between other kitchen tasks. This version calls for short-grain rice, which turns plump and pleasingly sticky as it cooks in a combination of milk and heavy cream. Adding a vanilla bean lends deeply aromatic notes, but if you don’t have one, just stir 1 tablespoon vanilla extract into the pudding along with the egg yolks. Or skip the vanilla and add a teaspoon of whole cardamom pods to the pot to round out the spicy flavor of the cinnamon. Whipped cream might be overkill on a pudding this rich but only in the very best way.

3/4 cup arborio or other short-grain rice

1. In the pressure cooker pot, stir together the rice, milk, sugar, cinnamon stick, orange zest (if using), vanilla bean and seeds, and salt.

2. Lock the lid into place and cook on high pressure for 10 minutes. Let the pressure release naturally for 10 minutes, then manually release the remaining pressure.

3. Open the lid and discard the cinnamon stick, orange zest and vanilla bean.

4. In a small bowl, whisk together the cream and yolks. Whisk into the rice and continue to stir until slightly thickened, about 2 minutes. (It will still look soupy at this point.) The residual heat of the rice will cook the yolks, and chilling will thicken the pudding. Stir in the raisins, if using.

5. Spoon the pudding into serving bowls, then cover with plastic wrap and chill for at least 2 hours. Serve with a sprinkle of ground cinnamon or cardamom and whipped cream, if you’d like.