Alexis Tsipras, the firebrand Greek leftist who lost his bitter fight with Europe’s establishment to end its harsh economic austerity against his country, seeks re-election on Sunday a month after he resigned as prime minister.

His Syriza party is in a tight election race with the conservative New Democracy party of Vangelis Meimarakis, who accuses Tsipras of incompetence in dealing with international creditors who have been bailing out the debt-strapped country.

Voting started at 0400 GMT, with just under 10 million Greeks eligible to vote. It was scheduled to end at 1600 GMT with an early vote projection expected by 1800 GMT.

Opinion polls suggest Tsipras may have the edge, but so narrow a one that a win for Meimarakis would not be surprising. Neither party, however, is expected to get the roughly 38 percent of the vote generally seen as needed for a clear majority in the 300-seat parliament.

That means whoever gets the most votes – and a 50-seat bonus that goes with it – will need to form a coalition, probably with one or both of the small centrist To Potami and socialist PASOK parties. 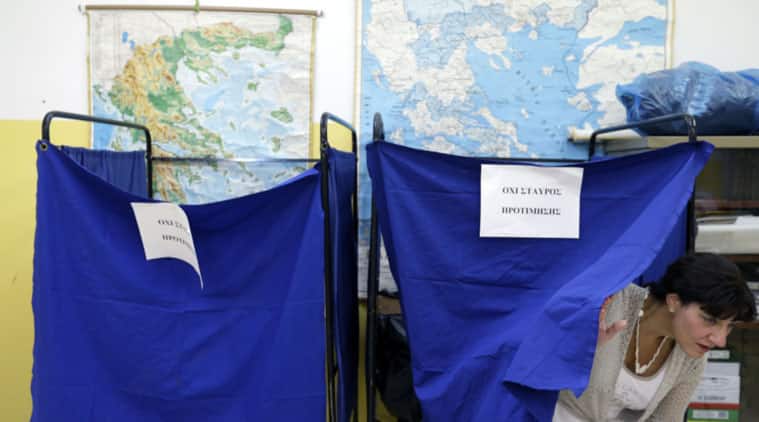 The election is being watched closely outside Greece because the winner will need to oversee deep economic reforms required for an 86-billion-euro ($98-billion) bailout Tsipras was forced to broker in August with Athens’ euro zone partners.

The new government will also have to arrange a recapitalisation of the country’s banks, and the unwinding of capital controls imposed in June to prevent an implosion of the financial system.

Both Syriza and New Democracy have pledged to do that – but there are differences on the margins over such issues as labour reform.

Sunday’s vote is the third national ballot this year after the general election in January that brought Tsipras to power and a referendum in July on whether to accept a new bailout deal and austerity plan from the European Union.

The answer to the latter was a resounding “no”, but with Greece close to tumbling out of the euro zone, Tsipras went ahead and agreed a new deal he did not want. He then resigned and called a snap election.

Multiple trips to the ballot box and disappointment at being rebuffed by Europe, however, have sapped the energy of many Greeks for this election – which has been relatively low key.

“It would have been better not to have these elections. Three elections within the same year is quite hard on the people but as a citizen I will do my duty,” said Athens resident Yannis Partidas.

On the eastern Aegean island of Kalymnos, a taxi driver who gave his name only as Manolis was less tolerant of the situation and the years of economic hardship Greeks have endured, “I don’t care, probably I won’t even go (to vote),” he told a visiting Reuters reporter. “All the politicians are the same – idiots.”

Raj Thackeray won’t be allowed to enter Ayodhya till he apologises: BJP MP