Around 4000 refugees arrive in Austria from Hungary, many still want to enter Germany

Hundreds of exhausted migrants streamed into Austria on Saturday, reaching the border on buses provided by an overwhelmed Hungarian government that gave up trying to hold back crowds that had set out on foot for western Europe.

After days of confrontation and chaos, Hungary’s right-wing government deployed dozens of buses to move on migrants from the capital, Budapest, and pick up over 1,000 – many of them refugees from the Syrian war – walking down the main highway to Vienna.

Austrian police said on Saturday around 4,000 refugees had arrived from Hungary by bus at the border since the early morning hours, with many more to come.

“We estimate that around 4,000 have arrived – and I don’t think that is the end of it,” said Helmut Marban, spokesman for the police in the province of Burgenland, adding some already had continued their journey onwards.
“The numbers could well double, if not more,” he told Reuters.

A special half-hourly train service was now running to take people from the border to Vienna on top of 20 buses shuttling back and forth between the Austrian capital and the border with Hungary.

Austria said it had agreed with Germany that they would allow the migrants access, unable to enforce the rules of a European asylum system brought to breaking point by the continent’s worst refugee crisis since the Yugoslav wars of the 1990s.

Wrapped in blankets against the rain, hundreds of visibly exhausted migrants, many carrying small children, climbed off buses on the Hungarian side of the border and walked in a long line into Austria, receiving fruit and water from aid workers. 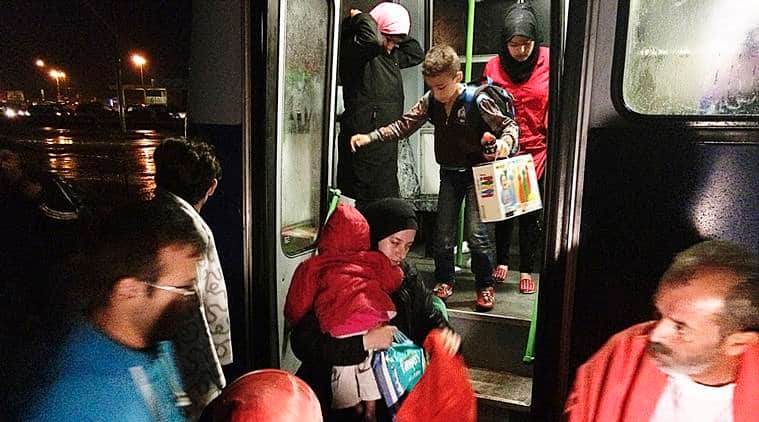 Migrants leave a bus near the Austrian border in Hegyeshalom, Hungary, Saturday, Sept. 5, 2015. Hundreds of migrants boarded buses provided by Hungary’s government as Austria in the early-morning hours said it and Germany would let them in. (Source: AP)

“We’re happy. We’ll go to Germany,” said a Syrian man who gave his name as Mohammed.

Hungary cited traffic safety for its decision to move the migrants on. But it appeared to mark an admission that the government had lost control in the face of overwhelming numbers determined to reach the richer nations of northern and western Europe at the end of an often perilous journey from war and poverty in the Middle East, Africa and Asia.

On Friday, hundreds broke out of an overcrowded camp on Hungary’s border with Serbia; others escaped from a stranded train, sprinting away from riot police down railway tracks, while still more took to the highway by foot led by a one-legged Syrian refugee and chanting “Germany, Germany!”

The scenes were emblematic of a crisis that has left Europe groping for answers, and for unity.

By nightfall, the Keleti railway terminus in Budapest, for days a campsite of migrants barred from taking trains west to Austria and Germany, was almost empty, as smiling families boarded a huge queue of buses that then snaked out of the capital.

The migrants left shoes, clothes and mattresses scattered behind them. Helicopters circled overhead.

Austria’s Red Cross said it expected between 800 and 1,500 people to arrive in its refugee reception centre of Nickelsdorf at the Hungarian border overnight.

“Because of today’s emergency situation on the Hungarian border, Austria and Germany agree in this case to a continuation of the refugees’ journey into their countries,” Austrian Chancellor Werner Faymann said on his Facebook page.

Even as the buses arrived to collect them, some migrants remained suspicious, mindful of how hundreds of their number had boarded a train on Thursday that they believed was heading to the border but was stopped just west of Budapest by riot police who ordered them into a reception camp.

For days, Hungary has cancelled all trains going west to Austria and Germany, saying it is obliged under EU rules to register all asylum seekers, who should remain there until their requests are processed. Many have refused and several thousand had camped outside the Budapest train station.

On Friday, a crowd that swelled to over 1,000 broke away, streaming through the capital, over a bridge and out onto the main highway from Budapest to Vienna, escorted by police struggling to keep the road open. Some clutched pictures of German Chancellor Angela Merkel.

The turmoil contrasted with a pledge by Hungarian Prime Minister Viktor Orban to get to grips with a crisis he says threatens Europe’s prosperity, identity and “Christian values”; parliament on Friday tightened laws that his government said would effectively seal Hungary’s southern border to migrants as of Sept. 15.

Orban, one of Europe’s most outspoken critics of mass immigration, hailed “a different era”, but Friday brought more desperate scenes. A Pakistani man died, police said. State television said he had stumbled and hit his head as he ran down train tracks.

More than 140,000 migrants have been recorded entering Hungary so far this year through the EU’s external border with Serbia, where Orban’s government is building a 3.5-metre (11.5-foot) high wall. Countless others may have entered without registering.

Hungary says they have been spurred by Germany saying it would accept asylum requests from Syrian refugees regardless of where they enter the EU, contrary to EU rules.

On Friday, lawmakers adopted some of a raft of measures creating “transit zones” on the border, where asylum seekers would be held until their requests are processed and deported if denied.

The measures introduce jail terms for those who cross the border without permission or damage the fence, and may eventually provide for the use of the army.

CBI raids wrong, says Cong, as it throws its weight behind Chidambaram